Lately I’ve been seeing birth stories pop up on mom blogs, and I decided that I would get on the bandwagon and get mine written.

Obviously, Harlyn is four and Maverick is one, so I’m a little behind, but hey….#thisaveragemom

Today, it’s all about my first baby

On Monday, April 21, 2014, I went to my OB to have my membranes stripped. At that appointment, I was dilated to 3 (the week before was 2). I did not expect the stripping to hurt as bad as it did! But my OB recommended we do it so we could try to jumpstart labor. He was starting to get concerned about her size versus my size, but he said he couldn’t actually induce for no reason at 37 weeks, so he was hoping the stripping would work. He said if it did, it’s usually 24-48 hours. Of course Brandon and I couldn’t sleep at all just wondering if/when the baby would come after that! I wish we would have been able to because a few days later…

Very early on Wednesday morning (I think about 3 am), I started having contractions. I wasn’t really sure that’s what they were since I could walk, talk, and function just fine through them. About 4 am I started timing them, and I was thinking they were about 5 minutes apart. Finally around 7 am, I called my OB and he said the only way to know was for me to head to the hospital. So we headed up to the hospital, they hooked me up and monitored me for a while. They said my contractions were about 6-7 minutes apart and I was dilated to 4. So they called up my OB and he said to walk around the hospital for one hour to see what happened. Brandon and I started walking the halls and became quite the phenomenon! Every single nurse we saw commented on how quick we were walking! Anyway, after 3 rounds of walking the halls/monitoring, we headed home after 4 hours there with no further dilation and only a little quicker contractions. We came home and I got into the bath per my nurse’s suggestion. Then we took a nap since both my OB and my nurse had said they thought I’d be back that night. They were right.

Around 8:30-9:30 pm Wednesday night, I started getting very uncomfortable. The contractions were getting worse but not coming any closer together. I decided to go to bed around 9:30 because I was just in pain and wanted to see if I could sleep! NOPE. We never slept a wink. I was basically writhing around our bed in pain and agony until 12 when Brandon called the OB and he sent us to the hospital. I was scared of being sent home again, and I didn’t know what I’d do if they did send me home because I was hurting so bad. I also didn’t want anyone to make me walk the halls because I just felt so crappy. When we got there, I was still dilated to about 4, but this time I got pain meds! Then they said I could get a bag of fluids for one hour so I could have my epidural right after. I was like, wait, what? So this is it then, we’ll have a baby? And once my nurse said that, it was time to call the parents and my BFF Rachel. B’s parents and my mom hopped in the car together at 3:30 am and started their journey from MI to NC. Rach made it to the hospital about 7 am (she’s near Charlotte so a quicker drive for her!) .

After the epidural (which was a bit of stinging but not all that terrible compared to my contractions!), things really improved! I had to ask Rach and B to look at the screen to confirm when I was having contractions…how awesome to not feel them! After some time had passed and I still was not progressing much, I got Pitocin to get labor going. They said they’d come back in one hour to check how far I’d dilated. Welllll, PITOCIN WORKS. During that one hour (which was actually longer since my nurse disappeared for an emergency in the room next to mine), I made it to 10 and was really feeling terrible pressure. I told Rach and B that something wasn’t right, it just had to be time. I finally let them go get someone, but in hindsight I should have had them find someone sooner. But since it was my first time, I didn’t really know that what I was feeling was actually my body being ready to go…and I’d been feeling it awhile. When my nurse returned, she said it was time to push. Every time I pushed my leg would cramp so bad it was almost worse than the pushing. B was a total champ and was the only person in the room other than my nurse and me, so it’s a good thing he was functioning on adrenaline! At one point my nurse tried to keep me from pushing since we were waiting for my OB to get there, but I just wasn’t able to ignore that urge…so they had a midwife waiting just in case my doctor was too late. He literally came RUNNING into my room (Rach said he had actually run past her in the waiting room) and they threw his gown on him and it felt like 1 second later my baby girl was coming. At some points, I definitely lost my cool and was just panicking saying I couldn’t do it, they were all ripping my body apart, etc. And I really thought I’d die when my OB told me he had to an episiotomy. Everything was just a blur and when I was just about to really fall apart, my doctor, nurse, and B all told me to look down…and she was almost OUT! Then she was out, B cut the cord, my doctor sucked out her nose, mouth, etc, and after a few quick things he flung her up on my chest and she was in my arms. I sobbed. So did B. It was just amazing, exhausting, horrifying and awesome all in one. I did also have a 3rd degree tear in addition to the episiotomy so it was really painful. The stitches were also awful going in. After delivery, the nurses got me ready to go to my recovery room. Harlyn’s blood sugar was low so they wanted me to get her fed immediately after transferring me to my new room, and once I did, her sugars were great!

Childbirth was such an experience and I will never forget birthing my first baby. She was beautiful and perfect, and I am so thankful that God chose me to be Harlyn’s mommy. To My Maverick on his 2nd Birthday 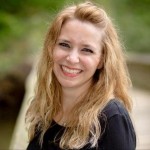